Below we summarize the most relevant tax aspects in the tax reform bill, that was sancionated by President Petro.

Whenever the Cleansed Tax Rate (CTR) is less than 15%, the amount of the Additional Tax (AT) must be calculated to reach the 15% rate as follows:

The above only applies to industrial free trade zone users that in tax years 2023 or 2024 submit an internationalization and annual sales plan that establishes maximum targets of net revenues of any type from the national customs territory and for revenues earned by the industrial user other than from the performance of the activity for which it received authorization, recognition or qualification, during the corresponding tax year.

To this end, they must sign an agreement with the Ministry of Commerce, Industry and Tourism for each tax year.

In the event no agreement is signed or that the maximum revenue targets are exceeded, the income tax rate will be thirty-five percent (35%).

This surcharge cannot be passed on to the end users, considering the established competition regime for each stage of the electricity public utility service value chain. The Energy and Gas Regulatory Commission (CREG, by its acronym in Spanish) will establish regulations on this matter, and the Superintendence of Household Public Utility Services will perform inspection and oversight within the scope of its powers. 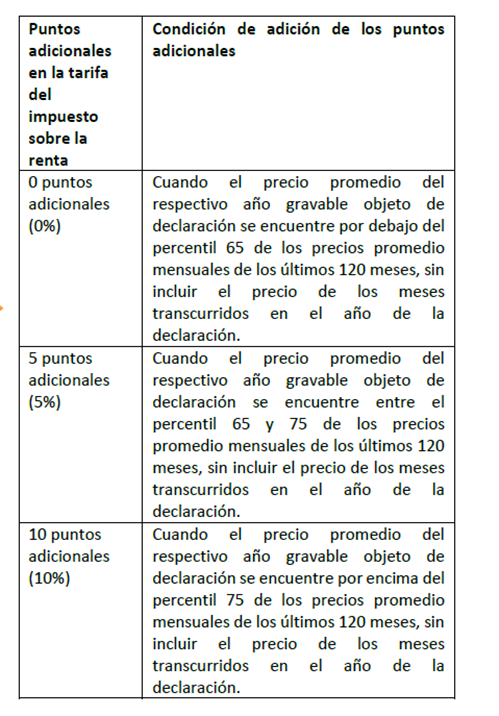 The prices to be used in the above table for the economic activities of hard coal mining (ISIC – 0510) and lignite mining (ISIC – 0520) are those of the average international coal price benchmark API2, minus freight costs BCI7 (API2 – BCI7) in USD/Ton, deflated by the Consumer Price Index for all urban consumers in the United States of America, as published by that country’s Bureau of Labor Statistics. 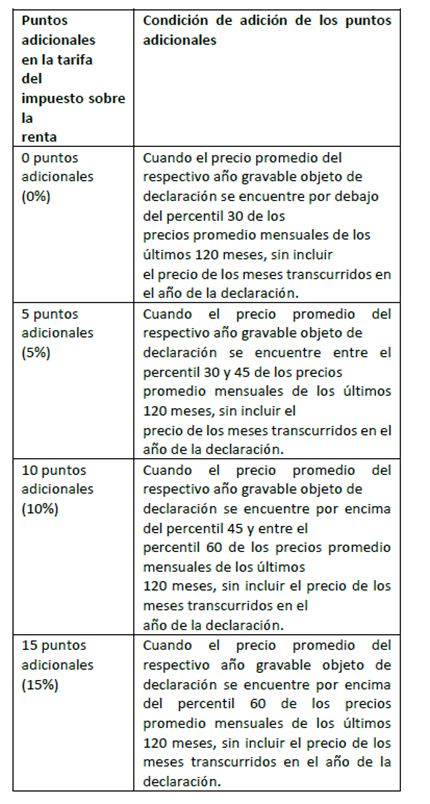 The costs and expenses that give rise to this tax credit cannot be capitalized and cannot be subsequently included as a cost or deduction by the same taxpayer.

Once the tax has been established, after having added work-related income, pensions and dividends, a credit on the total calculated tax is granted, determined as follows:

This arrangement maintains the assumption that all types of income continue to be added for the effects of quantifying the income tax, and a tax credit is granted when income from salaries is greater than declared dividends. In this case, the tax on dividends increases.

To illustrate the above, we present the following example:

An individual has a salary of COP 5.2 million per month and receives annual dividends of COP 61.038.000.

1.1 Deliberate and systematic interactions are maintained in the Colombian market, i.e., with client(s) and/or user(s) located in the national territory, and

1.2 During the previous or current tax year it has obtained gross revenues of thirty-one thousand three hundred (31,300) UVT or more from transactions involving the sale of goods to client(s) and/or user(s) located in the national territory.

2.4 Any form of monetization of information and/or data of users located in the national territory and that has been generated by the activities of such users in digital markets.

2.6 Digital subscriptions to audiovisual media including, among others, news, magazines, newspapers, videos and games of any type.

2.10 Provision of distance learning or training.

2.11 Provision of the rights to use or to exploit intangible assets.

2.12 Other electronic or digital services aimed at users located in the national territory.

2.13 Any other service provided through a digital market aimed at users located in the national territory.

For income tax effects, in-kind payments to third parties must be reported as income in favor of the beneficiary, at market prices, in the case of payments made by the payer to third parties for the provision of services or the acquisition of goods that are to be used by the taxpayer or his/her spouse, or his/her relatives up to the fourth degree of consanguinity, second degree of affinity and up to the first degree of civil relationship, whenever it does not represent own income earned by such persons and excluding the contributions that employers are legally required to make to the Comprehensive Social Security System, the Colombian Family Welfare Institute (ICBF, by its acronym in Spanish), the National Learning Service (SENA, by its acronym in Spanish) and the Family Compensation Funds.

To these effects, when the beneficiaries are conditioned or do not have control or capacity to dispose of the underlying assets, the founder, constituent or originator or the assets transferred to the private interest foundation, trust, insurance with a material savings component, investment fund or other trust business, will be the party required to file the tax on equity. The above is independent from the discretional, revocable or irrevocable nature, and independent from the powers of the protector, investment advisor, investment committee or irrevocable powers of attorney granted to the trustee or a third party.

In the event of the death of the founder, constituent or originator, such assets will be reported by the non-settled estate, until when the beneficiaries receive the assets, to which end the intermediate companies created for such purpose will not be recognized for tax effects. In the event the identity of the founder, constituent or originator cannot be determined, or the estate has already been settled, the direct or indirect beneficiaries of the assets will be the ones required to file the tax returns, even if their benefits are subject to conditions or terms, or if they have no control nor capacity to dispose of the assets, independently of whether they have title or possession over the assets.

The above provisions for determining the taxable base only apply to the tax on equity and cannot be applied to other taxes.

A single economic event must not give rise to more than one tax benefit for the same taxpayer, except when the Law expressly allows it.

If a taxpayer uses multiple tax benefits for the same economic event, the taxpayer will lose the largest benefit, without prejudice for additional penalties due to inaccuracy.

This does not apply to work-related income and legal or regulatory income. 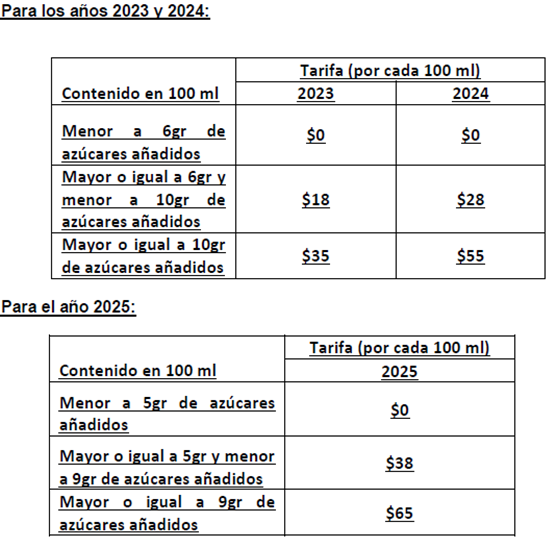 However, the following formula is added to determine the tax amount that applies to each beverage:

The definition of the taxable person for this tax continues to be the producer and/or importer, as the case may be.

The stamp tax accrues when documents are formalized as public deeds, along with the registration tax, except in the case of the disposal in any manner of real estate properties whose value is less than twenty thousand (20,000) UVT (COP 848,000,000) and that have not been subject to this tax, or ships, or the establishment or cancellation of mortgages thereon. In the case of open-end mortgages, the tax will be paid on the respective debt documents.

Provisions are clarified for the import of goods through postal traffic, overnight deliveries, or courier services whose value is less than two hundred dollars (USD 200), which must be in accordance with the provisions of each Free Trade Agreement, and it clarifies that the FTA must expressly establish that such deliveries will not be taxed.

The penalty for not reporting is reduced, and the principle of favorability can be applied. The penalties will be as follows:

Individuals and entities required to report tax information, and those who have been requested to provide information or evidence, and who fail to provide it, or fail to provide it within the term established to this effect, or when the contents thereof contain errors or do not fulfill the requirements, will incur in the following penalties:

Those required to report may voluntarily correct the errors before the Tax Administration issues a statement of objections, in which case they must calculate and pay the corresponding penalty described in item 1) of this article, reduced to ten percent (10%).

When missing or inaccurate information is reported in different forms or is included in a different report, for the effects of calculating the penalty described in this article, the penalty will be assessed on the omission or error that represents the highest amount.